Researchers have discovered a nearly complete 3.8-million-year-old skull of an early ape-like human ancestor in Ethiopia.

An analysis of the new specimen challenges ideas about how the first humans evolved from ape-like ancestors.

The current view that an ape named Lucy was among a species that gave rise to the first early humans may have to be reconsidered.

The discovery is reported in the journal Nature.

The skull was found by Prof Yohannes Haile-Selassie at a place called Miro Dora, which is in the Mille District of Ethiopia’s Afar Regional State.

The scientist, who’s affiliated to the Cleveland Museum of Natural History in Ohio, US, said he immediately recognised the significance of the fossil.

“I thought to myself, ‘oh my goodness – am I seeing what I think I am seeing?’. And all of a sudden I was jumping up and down and that was when I realised that this was what I had dreamt,” he told BBC News.

Prof Haile-Selassie says the specimen is the best example yet of the ape-like human ancestor called Australopithecus anamensis – the oldest known australopithecine whose kind may have existed as far back as 4.2 million years ago.

It had been thought that A. anamensis was the direct ancestor of a later, more advanced species called Australopithecus afarensis, which in turn has been considered a direct ancestor of the first early humans in the grouping, or genus, known as Homo, and which includes all humans alive today.

The discovery of the first afarensis skeleton in 1974 caused a sensation. She was nicknamed Lucy by researchers after the Beatles song, Lucy in the Sky With Diamonds, which was playing at the excavation site.

Hailed as “the first ape to have walked”, Lucy captured the public’s attention. But writing a commentary in Nature, Prof Fred Spoor, of London’s Natural History Museum, said that anamensis “looks set to become another celebrated icon of human evolution”.

The reason for this likely elevated status is because we can now say that anamensis and afarensis actually overlapped in time. The former did not evolve directly into the latter in a neat linear manner, as previously supposed.

The realisation comes about through the reinterpretation that the new fossil brings to bear on a previously discovered 3.9-million-year-old skull fragment. That fragment had been assigned to anamensis. Scientists can now see it is actually the remains of an afarensis, pushing this species’ origin deeper into the past.

It’s apparent now the two species must have co-existed for at least 100,000 years. 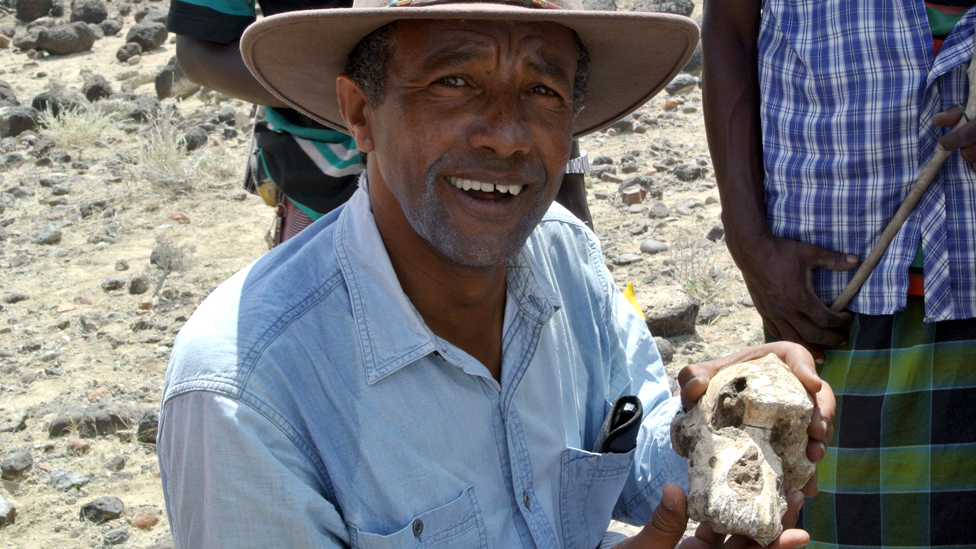 I thought to myself ‘Oh my goodness, am I seeing what I think I’m seeing?’

What most likely happened was that a small group of anamensis isolated itself from the main population and over time evolved into afarensis because of adaptations to local conditions. The two types rubbed along for a while before the remnant anamensis died out.

The finding is important because it suggests that additional overlaps with other advanced ape-like species may also have occurred, increasing the number of potential evolutionary routes to the first humans.

In short, although this latest discovery does not disprove that Lucy’s kind gave rise to the Homo group, it does bring other recently named species into contention. Prof Haile-Selassie agreed that “all bets are now off” as to which species is humanity’s direct ancestor.

He explained: “For a long time, afarensis was considered the best candidate as an ancestor to our kind, but we are not in that position any more. Now we can look back at all the species that might have existed at the time and examine which one may have been most like the first human.”

The term “missing link” drives anthropologists crazy when they hear anyone, especially journalists, use it to describe a fossil that is part-ape and part-human.

Indeed Dr Henry Gee, a senior editor at Nature, once threatened to “rip my liver out and eat it with onions, borlotti beans and a glass of claret” if I did so when reporting a previous discovery.

There are many reasons for Henry’s irritation, but chief among them is the recognition that there are many links in the chain of human evolution and most if not nearly all of them are still missing.

Anamensis is the latest in a string of recent discoveries that shows that there was no smooth line of ascent to modern humans.

The truth is far more complex and far more interesting. It tells a story of evolution “trying out” different “prototype” human ancestors in different places until some of them were resilient and clever enough to withstand the pressures wrought by changes in climate, habitat and food scarcity – and evolve into us.

Prof Haile-Selassie is one of the few African scientists working in human evolution. He is now a recognised name but he says it’s hard for well qualified African researchers to get the necessary financial backing from Western-based research funding organisations.

“Most of the fossil evidence related to our origin comes from Africa and I think Africans should be able to use the resources available in their own continent and advance their career in palaeoanthropology. Their limitations getting to this field of study is usually funding,” he told me.

Media playback is unsupported on your device x Media captionChancellor Philip Hammond at the IMF/World Bank spring meetings It is time to get Brexit “off the table” so that Britain can focus on other issues, the chancellor has said. Philip Hammond told the BBC that getting a deal done soon would release the “bandwidth” needed […]

Image copyright Family photo Image caption Theo Treharne-Jones had been on holiday with his parents, siblings and extended family Locked doors in apartments where a five-year-old boy died on a family holiday in Greece could be opened easily by a child, a pre-inquest review has heard. Theo Treharne-Jones died after being found in a pool […]

Media playback is unsupported on your device x Media captionUS migrant children ‘hungry, dirty, sick and scared’ More than 100 migrant children have been returned to a Texas border station just a day after being transferred, US border officials say. About 250 migrant children were moved from the overcrowded centre after lawyers granted access by […]